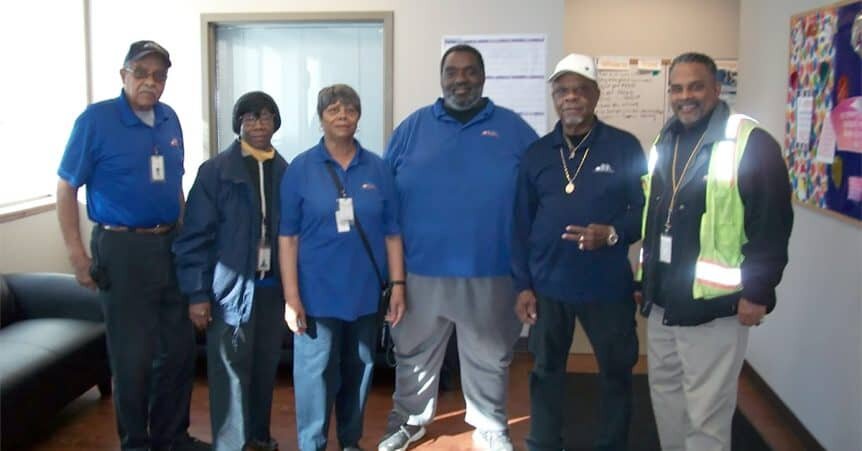 At MTM Transit (formerly known as Ride Right), our staff are truly our greatest asset. Without the caring vehicle operators who provide reliable transportation to passengers day in and day out, we would not be celebrating a huge milestone in MTM Transit’s history this year: 10 years of transit excellence!

Since 2009, transit agencies across the country have relied on MTM Transit to transport their passengers to medical appointments, employment opportunities, social activities, grocery shopping, family events, and other vital community resources. In celebration of our 10 year anniversary, we’re highlighting several of our staff members who have been with us since nearly the beginning in Hamilton County, Ohio and Lancaster, Ohio—two of our first transit operations.

Take a moment to meet 10 of these special employees below. They are truly a reflection of who MTM Transit is and why we are so successful. Thank you to our dedicated staff members for your tenure of providing excellent service to our clients and their passengers!

In January of 2010, MTM Transit partnered with the Hamilton County Department of Job and Family Services to provide paratransit transportation for Medicaid, children services, and pregnancy-related services. Our local team serves an area of more than 400 square miles around the Cincinnati region. Every year, our more than 100 team members provide in excess of 500,000 trips. In 2016, the County re-awarded the contract to MTM Transit, allowing us to continue serving their passengers through 2020. Meet some of the team members who have been with us in Hamilton County since the beginning!

Barbara Bell, Driver
Barbara has been with us since the inception of our Hamilton County operations 10 years ago. Prior to joining MTM Transit, she worked at Ford Motor Company for 38 years—she sure has dedication to her employers! Barbara says her favorite thing about being a driver is working with people, especially kids, every day. What is she most proud of during her tenure at MTM Transit? Her excellent track record of great attendance and continually excellent customer service. Outside of her work, she enjoys playing bingo and reading.

Isaac Campbell, Driver
Isaac is another driver who has been with MTM Transit since our start in Hamilton County; prior to joining our team, he worked as a driver and monitor for the County’s previous transportation contractor. Isaac says that he is most proud of his safety record—he has never had a safety accident in his career. Way to go Isaac! He says he really enjoys the flexibility our scheduling offers, and always runs his route on time while providing excellent customer service. Isaac is a man of many talents—while he’s not perfecting his driving skills, he plays the drums for two churches and in a separate band, owns his own recording studio, and produces and writes music.

Joe Johnson, Driver
For the past 10 years, Joe has served our Hamilton County passengers with pride. In fact, prior to joining MTM Transit, he even worked as a driver for the previous operator of the Hamilton County transportation program. He enjoyed his job so much that he stayed on board when MTM Transit took over. Joe says that outside of work, his favorite hobby is drag racing—but don’t worry, he doesn’t practice that activity while on duty! His record of perfect attendance and zero safety accidents proves that he isn’t incorporating his drag racing hobby into his work.

Ronald Long, Field Monitor
Ronald joined the MTM Transit team in 2010, and hasn’t looked back! The Hamilton County team can always count on him to provide great customer service to his passengers. In his free time, he is a football coach.

Mort Moore, Supervisor
Since joining us 10 years ago, Mort has been a reliable resource for our local team in Cincinnati. As a supervisor, he trains new employees and observes drivers on the road to make sure they continually follow safety protocol. MTM Transit can always count on Mort to run his routes on time and provide excellent customer service. He says his favorite thing about his work is that every day, he has the opportunity to interact with children and put a smile on their face. Outside of MTM Transit, Mort enjoys being a grandfather and watching movies.

Malissa White, Driver
As a driver with MTM Transit for the past nine years, Malissa takes pride in transporting children from their homes to daily care. She enjoys spending time with the kids, getting to know them, and making sure they get where they need to go, safely and on time. Malissa is very proud of the accomplishments she has achieved while with MTM Transit, including being named both a past Driver of the Month and Driver of the Year! While outside of work, she enjoys bowling, baseball, and traveling.

Angel Moore, Operations Assistant
Angel says that for the past nine years, she has taken pride in always being at work—and being the first to arrive and the last to leave. As the Operations Assistant, she keeps our operations moving day in and day out without delay. Angel says MTM Transit is truly a great place to work, and that she loves spending time with her co-workers.

Kenneth Balthaser, DriverMTM Transit began working with the Lancaster Public Transit System in January of 2011. This fixed route and paratransit operation serves nearly 123,000 passengers throughout Fairfield County each year. Since 2011, we have brought several improvements to the system. MTM Transit collaborated with the City of Lancaster to design, name, and implement a new deviated fixed route service to complement the paratransit operation. We have also successfully managed large increases in ridership, without increasing costs or sacrificing service quality. Meet some of the dedicated, long-term employees who have made this possible!

Over the course of his nine-year career with MTM Transit, Kenneth has always run his route on time, has received awards for perfect attendance, and takes pride in his record of customer service excellence. He says his favorite part of being an MTM Transit driver is working with children with special needs and making sure they have access to reliable transportation services. When he’s not working, Kenneth’s hobbies include gardening, collecting coins, and photography.

Dave Moyer, DriverRicky Kokensparger, Driver
Ricky a long-term employee of the Lancaster Public Transit system, having served as a driver for the City’s transportation contractors for the past 14 years. Nine of those years have been spent with MTM Transit. Ricky says his favorite part of working here is helping people access the world beyond what they would have been able to without reliable transportation services. He is extremely proud of his accomplishments with MTM Transit, which include excellent attendance and a top-notch record of safety and customer service. In fact, Ricky has never had a preventable accident throughout his entire career with Lancaster Public Transit, and was named our Driver of the Year in 2014. Outside of work, Ricky enjoys bowling, riding motorcycles, and camping.

Dave is the epitome of a long-term employee; he has been an employee of Lancaster Public Transit for more than 19 years, the past nine of which have been spent with MTM Transit. In this time, Dave has had zero safety accidents, always provides excellent customer service, and runs his route on time—way to go Dave! He says he enjoys his co-workers while at work, and outside of work, loves baseball and fishing.